Event Planning Tip 4: Use An Introduction 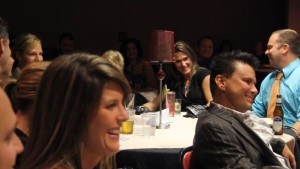 People in an audience want to like the person on stage, an introduction helps set everyone up for success.

Entertainers Should Be Properly Introduced to Your Group

So you’ve hired an entertainer, it’s the day of your event, it’s time for them to go on… now what?

Let everyone know why they should pay attention to this person! Using an introduction sets an audience and the entertainer up for success. It helps people know who they are about to meet and why they should care. It also helps them warm up and get excited for the entertainment. In this article I am going to share types of introductions, good information to include, and what to do AFTER an act ends.

There are a number of people who can introduce an act (special guest, CEO, event planner, emcee, DJ). I personally always bring a pre-written intros, complete with time tested jokes so the host can look their best when introducing. I also have pre-recorded audio introductions for situations that may have no one available to do the introduction.

If it is your job to craft an introduction, here are some good things you could include:

Just as it is good for someone to introduce an act, it also help to know what your event host will say AFTER an act has ended. This helps the act go on with a force, and leave gracefully as the audience is captivated into the next segment. Even for small banquets of under 100 people, the person doing the introducing and transition holds an important part for your event. They help your audience’s attention to not wander, and they should use intro’s and outro’s to help your entertainer make the impact you are looking for.