Questions About Hiring David Ranalli’s Magic & Comedy Show at Your Next Corporate Event? 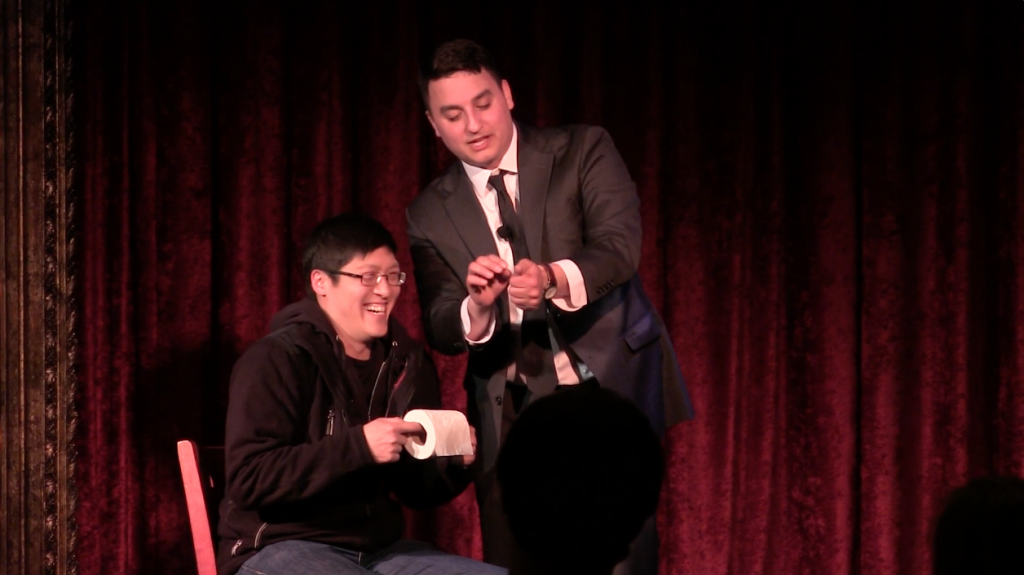 David Ranalli may be a master magician, but there are no hidden secrets in hiring him for your corporate event. Here are some of the most common questions we hear from event producers & planners. For any other questions, be sure to contact David.

How long are David’s stage shows?

Typically about 45-50 minutes, which is a suitable length for the majority of events. Specific lengths can be made upon request.

How long does David provide strolling magic for at events?

Typically David is booked for strolling magic for 2-3 hours, depending on the needs of the event. David also provides strolling magic in addition to a stage show, such as during a cocktail hour. This helps generate excitement, gets the audience familiar with David, and more comfortable participating in the big show later in evening.

Absolutely! All of David’s corporate & private party shows do not use any inappropriate humor or offensive topics. David knows your organization wants top quality entertainment that will be suitable for all audiences. No one will be left embarrassed and all audiences are treated with the highest respect.

Can David Emcee/MC my awards dinner or conference?

While David’s primary performs his magic and mind reading shows, he does MC large corporate events several times a year. In addition to working with your planning and scripting team for a smooth event, David Ranalli is able to incorporate his magic into the program to help keep people entertained and awake. He has emceed multi-day conferences, as well as award dinners, and functioned as the personality host of cocktail events.

Does David require any special equipment or elaborate set up?

Aside from a quality sound system & a suitable performing space, David does not require anything elaborate on your end to make his show happen at your event. His show sets up and strikes down within minutes. And, David will provide you with his full performance rider to make sure all specific details are taken care of. David typically shows up with two carry-on style suitcases, and has all of the equipment he needs.

How much does it cost to hire David?

While David does have set packages for his entertainment, these packages vary in price depending on the style of event, length of programming, location in the country, level of customization, and a few other factors. To get an accurate quote for your event, contact David here to get a customized proposal for your event planning team’s consideration.

Does David Ranalli have any videos or photos of his show and past corporate events?

Yes! In addition to having videos and photos on this website, you can also see more videos on his Youtube Channel. Be sure to subscribe as David is always adding more from his adventures.

Can I see David live before hiring him?

Most likely… The majority of David Ranalli’s events and shows are performed at live corporate events across the country. David can typically have you and your team come to the event as guests for the show portion of the event. Contact David to see if he is coming to your city. If you are based in Chicago, be sure to sign up for David’s email newsletter, as he is often performing publicly at the Chicago Magic Lounge.

FAQ’s about David Ranalli and his Background

For the next ten years David casually enjoyed learning about magic for fun. It wasn’t until his parents took him to see David Copperfield at the Allstate Arena did David learn that magic could be real, and he began to take it more seriously. After sneaking backstage to meet Copperfield, David learned that there were local magicians he could learn from. After seeking them out, David was on his way within a year to be performing professionally in restaurants. It was these early days in restaurants that Ranalli learned how to perform, approach people, and all the nuances involved in being a master magician.

Does David Ranalli give magic lessons?

While he has in the past, Ranalli’s schedule is now very packed and is unable to take on any more obligations such as lessons. However, David can connect you to resources if you (or someone you know) is seriously interested in learning. Be sure to sign up for David’s Newsletter, as you will get a free copy of his magic ebook, “Cool Magic Tricks You Can Do!”

How long has David been practicing the Art of Illusion?

David started learning magic at the age of 13, and has been continuously improving ever since. Now at age 28, David has been a magician for 15 years and counting. And while his skill is very refined and developed from thousands of performances, David still considers himself a student of magic and vows to never stop learning and improving until the day he dies.

David knows how stressful planning an event can be, but he also knows what it takes to make it a breeze. You can also reach him any time at (773) 245-6961, or via email at david@davidranalli.com